In the heart of the walled city, the castle est now the headquarters for the Northern Vosges Regional Natural Park! 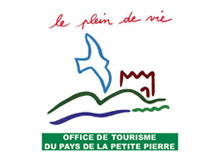 Constructed in the XII century along a strategic passage between Alsace and Lorraine, the castle of “La Petite Pierre” (the small stone) and its fortifications were modernised by Vauban in 1684. This castle that has never endured an attack with heavy artillery, now houses the administrative headquarters of the Northern Vosges Regional Natural Park, a territory classified as a “World Biosphere Reserve” by UNESCO.

This area is also home to the Museum of the Alsatian Seal in an old chapel, the Arts and Popular Traditions Museum, as well as the ‘‘Maisons des Païens’’ (House of Pagans), an ancient watchtower constructed in the XVI century, that today houses an exhibit of leather and wooden goods, many available for sale.